Shihan Michelle, CMA, RSME is a 6th degree Black Belt, 6-time World Oyama Knockdown Champion and holds many North American Open Tournament Championship titles in Kata (Form) and Kumite (Fighting). She won the Canadian Kyokushin Knockdown Division in 2001 and took 2nd place, plus the Fighting Spirit Award at the Seidokaikan “Knockdown Kings” tournament at Hunter College in NYC 2002. On October 9, 2004 she completed 61 consecutive fights with multiple opponents in the historic, “A Woman’s Right To Fight” held at the Manhattan Ballroom in NYC. The event was created to showcase the fighting spirit of the extraordinary women who practice full-contact karate and the event drew participants from the United States, Japan and Canada.

As a Laban Certified Movement Analyst and Somatic Educator, she is a uniquely qualified instructor and leader devoted to people of all ages and backgrounds discovering and developing grace and power through consistent practice.

Her book, Brain Breaks for the Classroom, was written for Scholastic Teaching Resources and published in 2009 and she is honored to have had her article, What’s Your Next Move; Consult Your Reflexes, included in Exploring Body-Mind Centering; An Anthology of Experience and Method published by North Atlantic Books. 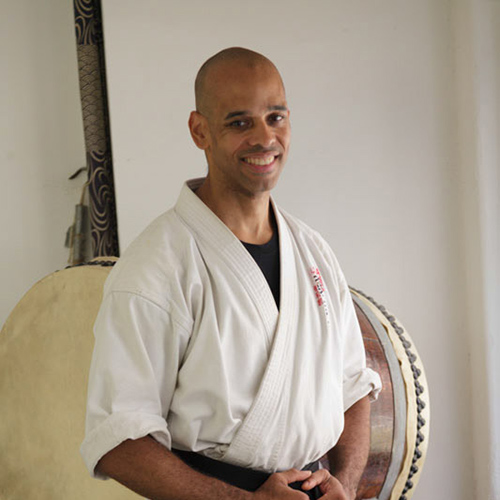 Sensei David is a 4th degree Black Belt at Karate-Do Ken Wa Kan. He began his study of Full Contact Karate in 1994 under Soshu Shigeru Oyama at World Oyama Karate Headquarters in New York City where he received his Shodan Rank (Black Belt.)  He continued his training at World Oyama Headquarters until Soshu retired in 2004. Emboldened by the need to continue to learn and grow, he began his study with Shihan Michelle Gay. After a few years of study, she asked him to begin teaching, and with that, he truly began to learn.

Sensei David feels quite blessed on a daily basis to be part of the truly special environment that is Ken Wa Kan Karate. To say that it is a special place would be an understatement. To be a part of this community with our incredible instructors, all of the wonderful Senpai (senior students), Kohai (junior students), parents and friends is such a joy. It has been a life changing experience to be able to train in an environment where everyone works together, supports each other, pushes each other and helps each other overcome the obstacles on and off the mat. To be able to empower students in all that they face in their journey to Black belt and beyond has been a truly extraordinary experience. BIG OSU!!!! Sensei Diane is a 4th Degree Black Belt who began her training in Full Contact Karate at World Oyama Karate Headquarters in 2001. After Soshu Oyama retired, she continued to train with Shihan Michelle and develop herself as a teacher. She began assisting as an instructor in 2008 and in 2011 was awarded the title of Sensei. She maintains her own consistent, rigorous training schedule and teaches several classes a week. She has also completed The Society for Martial Arts Instruction’s Level One and Two Somatic Based Instructor Training. Sensei Diane continues to train and teach well into her 60s and is a stand that it is never too late to begin martial arts.

Becoming an instructor at Karate-Do Ken Wa Kan has been a wonderful experience to explore the precision and intention of our basic techniques, especially Kata and how they are ultimately utilized in sparring. I’m continually inspired by the progress and growth of our students in their martial arts practice and wowed by their commitment and determination.

Sensei Diane is also a graduate of Carnegie Mellon University in the Drama Department with a BFA in Acting. She studied Stage Movement with Jewel Walker and Stage Combat with B.H. Barry. While at CM-U, her class was the first to be certified in the U.S. as proficient in stage combat by The Society of British Fight Directors. Sensei Diane has two children, Max and Chloe.

Sensei Zelda is a 3rd Degree Black Belt at Karate-do Ken Wa Kan and began training in Full Contact Karate at World Oyama Karate Headquarters in 1997 at the age of five. She obtained her Black Belt in 2006 under the guidance and direction of her mother, Shihan Michelle Gay. Karate-Do Ken Wa Kan is a family owned and run business and Karate is a lifelong family love affair!

Though she took a hiatus during high school, she returned to training and teaching during her summers home from Emerson College where she studied Acting & Fight Choreography. After graduating, Sensei Zelda returned to rigorously developing herself as a Martial Artist. Since 2010, she has become a competitive Knockdown Fighter & International Karate competitor. She earned the title of Sensei when her first students became Black Belts in 2019. When not teaching at Ken Wa Kan, she works as the C.E.O of Self Offense, a company she owns with Shihan Michelle that is working to end sexual assault and harassment in the world. Sensei Augusto is a 2nd Degree Black Belt at Ken Wa Kan and was seven years old when he started training with Shihan Michelle in P.S. 41’s after school program. He then went on to train with her at World Oyama Karate Headquarters. He began assisting with Shihan Michelle in the Ken Wa Kan Adult and Children’s program when he was eighteen years old as an Ikkyu (brown belt with a black stripe)  and has taught in both programs intermittently over the course of the last decade.  Sensei  Augusto obtained his First Degree Black Belt (Shodan Rank) in 2014 and his Second Degree (Nidan Rank) in 2015. He has competed in multiple Semi Knockdown Karate Fighting competitions and in May 2017 competed in his first Full KnockdownKarate Fighting competition and hopes to do more in the future. “My goal is to keep all students motivated and wanting more and to help them push themselves to their full potential.” 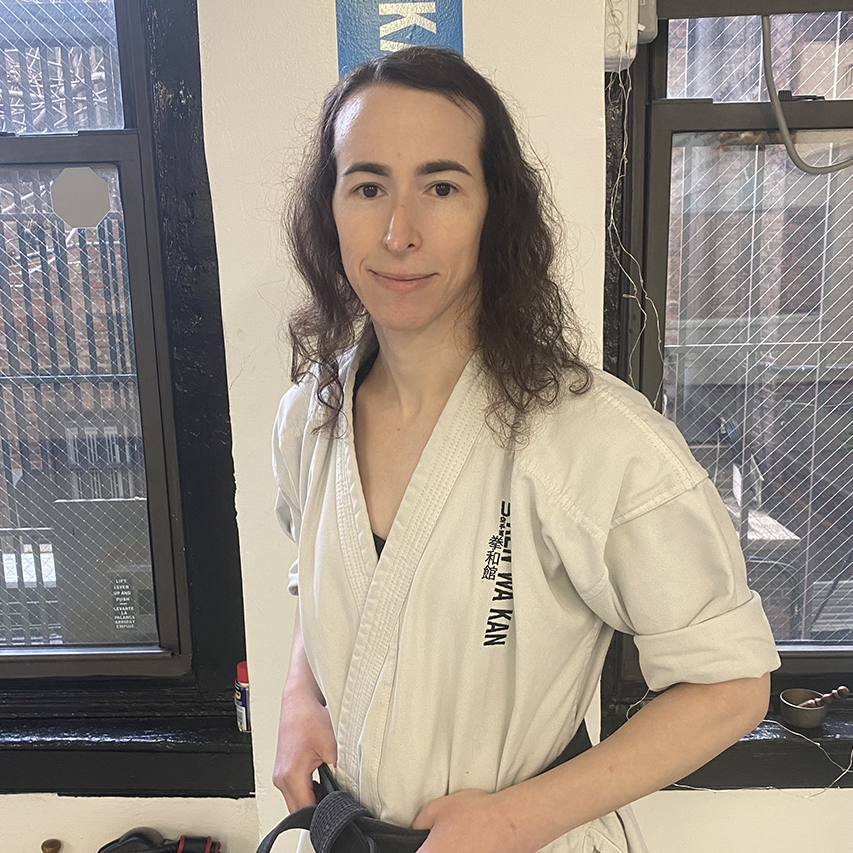 Tara began her martial arts training in 2016 with Muay Thai Kickboxing. Very shortly after, she began studying Brazilian Jiu Jitsu, in which she has achieved the rank of Purple Belt under Shihan Gene Dunn and Professor Brian Glick. She came to Karate-do Ken Wa Kan in 2018 and began her training in full-contact Karate as a deshi, receiving her first degree Black Belt from Shihan Michelle Gay in 2021. Tara believes in the power of martial arts practice to enhance one’s physical and mental well being. She is dedicated not only to a lifelong pursuit of constant and never ending improvement, but also to sharing this power with others. She is committed in particular to expanding access to martial arts and self defense training for members of the LGBTQ+ community. Chrissy Rose is a brown belt (2nd kyu) and Children’s Instructor at Ken Wa Kan Karate. She has been training for 3 years and  teaches in person and zoom classes. She is also a graduate of Columbia University’s MFA acting program. Joining the staff at Ken Wa Kan as a children’s program instructor has been incredibly rewarding to her where she gets to introduce children to the power and joy of martial arts! Weronika/veronika/Woźniak is an actress and martial artist from Wrocław, Poland. She started dancing at a young age of 5 and from her ballet, through jazz and musical theatre training, she landed at The Lee Strasberg Theatre and Film Institute in NYC, where she had her first fighting experience in stage combat class. After graduating, she booked an Off-Broadway play “The Video Games”, where she met and worked with Sensei Zelda for over half a year. Thanks to her, she joined Ken Wa Kan at the beginning of 2017 and since then have been a Deshi (Work Study Student) at Ken Wa Kan. Weronika is now pursuing her Black Belt, while assisting in the Children’s Karate Program and being trained to become a Karate teacher. She cannot imagine her life without the dojo and working with kids—they unleash her inner child which is so important as she continues her pursuits in acting.  Her favorite food is pierogi and mashed potatoes—obviously—she’s from Poland! Tao Brooks has been a member of the KWK family since 2013 and a staff member since 2015. For the past 6 years she has been the Pick Up Coordinator working with staff and our families to ensure the Pick-Up (Walkover) program operates with integrity and good management.  She is also a former Pick-Up chaperone. Her extensive professional experience as a coordinator for non-profits in community youth development organizations and collegiate level has given her a unique and well rounded approach to caregiving for all ages.